Greg Mergen, who has a food science degree from the University of Wisconsin and previous experience selling new and used machinery, says initially IME worked with startups on designing facilities and provided quality used equipment to companies both in the United States and abroad. At the time, he says, there was an attitude that equipment for processors in Mexico and other countries didn’t have to be as good.

“One of the things in the early days was we made sure we did it right for our customers. We got a lot of repeat business,” Mergen says.

“We started with one other employee and gradually built up,” he adds. “Concentrating on the small guy was key. We sold to large ones, too. If you have an item you want, we would meet the specifications and quality.”

In 1980, IME moved from Windsor, Wisconsin, into the larger facilities of the former Deerfield Creamery Co. building in Deerfield, Wisconsin, where IME remains today. The company achieved increases in sales over the years and now has 16-21 employees, adding subcontractors when it works on larger design projects. It has large and small customers all over the world, including in Puerto Rico, Honduras and Indonesia. Its main focus remains the cheese industry, but it also deals in equipment for other dairy products as well as chocolate makers and breweries. About 80 percent of its current business is in cheese and dairy.

“We sell to anyone with a cow up to cheese companies that produce millions of pounds of cheese a day,” says Jeff Klemp, vice president and general manager, IME. “Last week we went to a farm that wants to start bottling its own milk. We work with large plants, providing large production equipment, to the little guy stirring by hand.”

Trends that have kept IME extremely busy in recent years include the emergence of smaller artisan producers, as well as dairy farms looking to add value to their milk during periods of low prices. Mergen recalls when he started IME, little cheese factories were closing. This continued for about 25 years, and then people started building them again.

Reconditioned equipment is much more affordable for small plants and startups, often about a third of the price of new equipment. In addition to providing rebuilt equipment, IME will help design plants and processes for new startups and can acquire new equipment for them when necessary.

“In the past four or five years, we’ve designed three small ice cream startups, two fluid milk producers and three to four cheese plants,” Mergen says. “We’ll meet with them, look at the facility — or build a new facility — and consult on square footage. When they sign a package, they get unlimited revisions for a year.”

Beyond selling equipment and plant design, IME helps its customers throughout the process, providing service and support well beyond the sale. Klemp says some customers will call even if it’s about something IME didn’t sell them. Accessibility is a key draw for their customers.

“When companies are small, the owners do not have the time or knowledge to handle everything. We do have that service aspect. We won’t leave them high and dry after the sale,” Klemp says.

One piece of remanufactured equipment IME particularly is known for is the Duo-Vat, a combined pasteurizer and cheesemaking tank that Mergen invented in 1980. The Duo-Vat, available in capacities from 100 to 500 gallons, is ideal for farmstead cheese plants, small-batch specialty cheese production and pilot plant production testing.

“It’s not rocket science,” Mergen says. “I found a way to turn an old farm vat into a cheese vat/pasteurizer. We have sold quite

Mergen says what his customers appreciate most about doing business with IME is that it provides consistent, quality products.

“The fact that it works when it gets there — that’s always been the important thing, making sure equipment is properly rebuilt and tested,” Mergen says.                   CMN 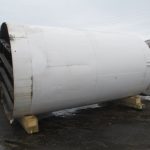